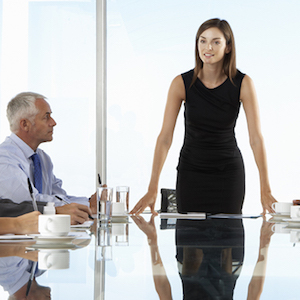 I was born too late to have been inspired by the wave of the feminist movement led by Gloria Steinem and her contemporaries, and I wasn’t wearing a bra yet when women were burning them. The origin of the feminist movement can be traced back to the 14th century when Christine de Pizan, a French poet, became one of the first women to earn a living by writing. Interestingly, the word “feminism” was first coined in 1837 by a man—Charles Fourier, a utopian socialist and French philosopher. The modern feminist movement began near the close of the 19th century, with the push for women’s suffrage, and has traveled through the 20th century on the waves of equality, affirmative action, women’s health, the glass ceiling, and many other powerful and polarizing issues. There are two women who are serious contenders for the 2016 presidential election—we’ve come a long way, baby.

But have we? When I look at my personal bookshelf, I count more than 20 titles having to do with women in business, including:

These authors, all of them notably expert in their field, encourage women to embrace their femininity, be one of the boys, lean in, rethink the rules of the game, and so on. Has anyone besides me noticed that there aren’t many books out there on how to be a man in business? Or are all other leadership books dedicated to our male counterparts by default?

Having been a woman in business for more than 25 years, and a reasonably successful one at that, here’s what I know and believe:

Fifteen years ago, my executive coach shared a quote that I’ve never forgotten: “Leadership is authentic self-expression that adds value.” It doesn’t matter what your chromosomal structure is—define success on your own terms and lead from your heart.