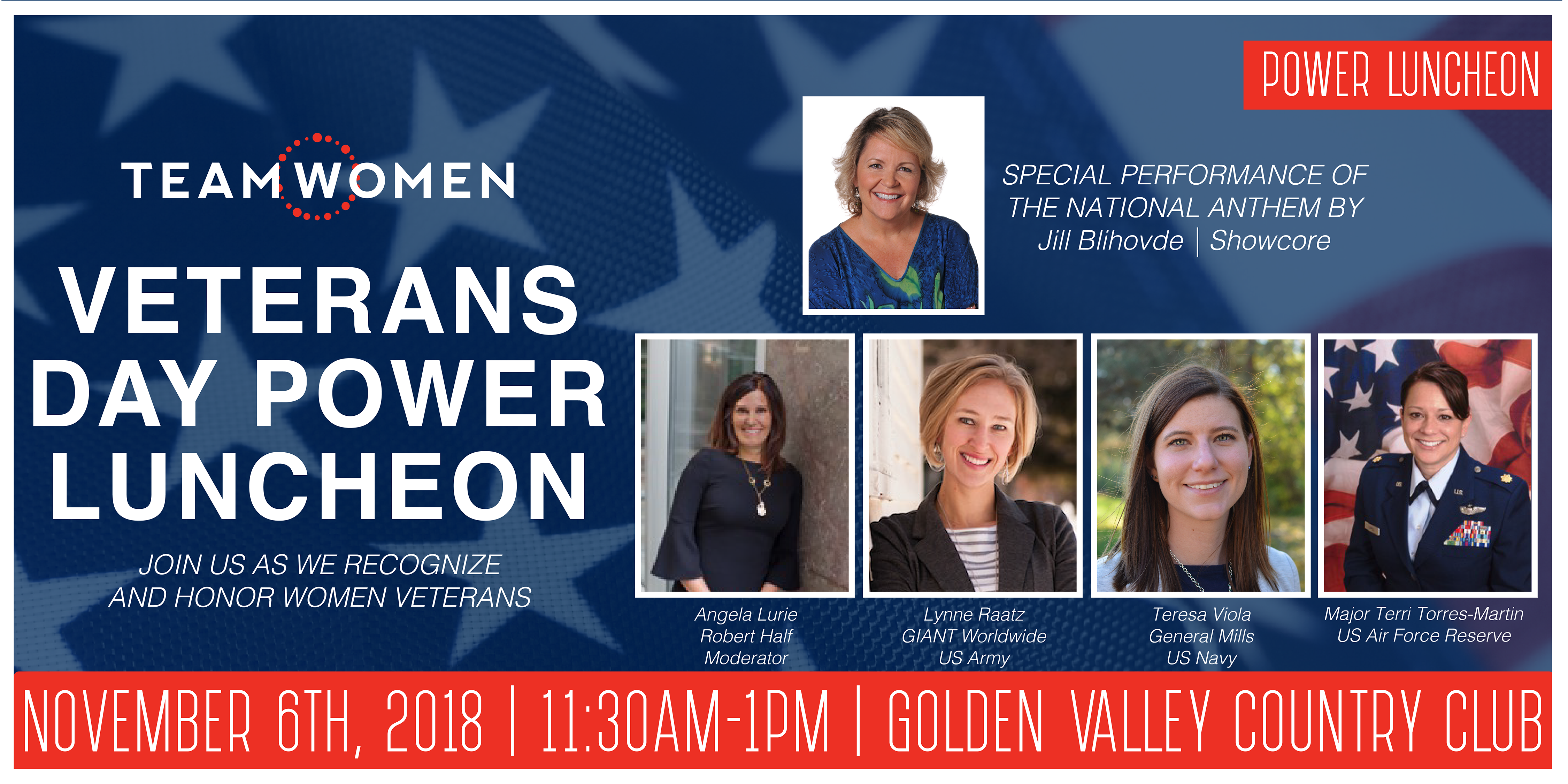 Join TeamWomen on November 6 as we recognize and honor female veterans! Be inspired by stories of women who have served, gain insight on leadership lessons they’ve gleaned, and hear ideas on how we can support our veterans.

We’re honored to have speakers from the US ARMY, US NAVY, and US AIR FORCE:

Lynne Raatz is a Senior Leadership Coach and Consultant with GiANT Worldwide and the Founder and Owner of Lynne Raatz Coaching and Consulting L.L.C. Lynne holds a Master of Arts Degree in Leadership and a Master of Arts Degree in Theology. Lynne is also an International Coach Federation trained coach. Lynne’s professional background includes serving as an active duty Army Officer which greatly shaped her heart and passion for developing leaders.

While in the Army, Lynne was stationed at Ft. Bragg, NC and Ft. Monroe, VA.  Her time on active duty also included a 15-month deployment to Iraq with the 16th Military Police Brigade Headquarters out of Ft. Bragg.  While Lynne was officially a Human Resources officer, her time in Iraq proved to be a unique experience with many roles outside of the HR field.

Lynne and her husband Jack now live in the Northwest Metro with their three boys ages 9, 8 and 4.

Teresa Viola is an analytics consultant at General Mills here in Minneapolis. After growing up in Michigan, she joined the United States Navy in 2005, leaving for boot camp four weeks after graduating high school. Her military service lasted for six years, four of which she spent stationed onboard a destroyer in Norfolk, Virginia. She deployed twice: once to Europe and the Black Sea, and once to the Horn of Africa. After completing her service, she pursued a B.S. in Mathematics at the College of William and Mary in Williamsburg, Virginia. She graduated in 2015 and spend the next three months traveling the country in a van with her husband, Dan, and her dog, Ollie. Over 2016, she worked as a project developer for a small non-profit operating in Michigan and El Salvador before deciding to pursue a graduate business degree. In December 2017, she graduated from the University of Michigan Ross School of Business with a M.S. in Supply Chain Management and accepted her current position at General Mills. When she is not working, Teresa loves to travel, play with Ollie, read, and explore her new home in the Twin Cities.

Major Terri Torres-Martin has served in the military for 17 years as a pilot and maintenance officer. Having logged over 2,500 hours as a command pilot, she currently flies C-130s for the Air Force Reserve at Minneapolis/St Paul Air Reserve Station.

Prior to joining the military in 2001, Terri worked as an Athletic Trainer (ATC) for a community college and flight instructed in her spare time.

Terri holds a BS in Physical Education/Kinesiology from California State University San Bernardino and a Master of Military Operational Art and Science from The Air University, Maxwell Air Force Base, AL.

Angela is a member of TeamWomen, the CFO Leadership Council in Minneapolis, and a member and former board member of Financial Executives Institute. Angela was named one of the Minneapolis/St. Paul Business Journal’s 2017 Women in Business honorees. She has received multiple awards for her leadership, dedication, outstanding efforts and achievements. Angela received her undergraduate degree from the University of Wisconsin and her MBA from the University of Minnesota.

Robert Half has more than 340 staffing locations worldwide and offers online job search services at roberthalf.com.

Thank you to our featured annual sponsor: