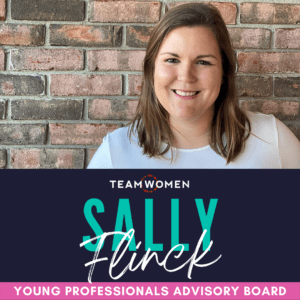 Sally Flinck, a Tennessee native, joined TeamWomen as a member in 2021 after relocating to Minnesota. She may be new to Minnesota but is well-versed in working with nonprofits. She is currently Vice Chair of our Community Outreach Committee, and we’re excited to have her join our Young Professionals Advisory Board!

A previous direct supervisor has been influential in empowering Sally. She not only helped guide Sally to succeed in her position, but she also helped her stand up for herself as a female in the workplace. Those lessons have become even more vital as Sally finds herself on a predominately male leadership team.

Sally has served on several boards throughout her career, including the Young Professionals Board for the Williamson County Chamber in Franklin, TN., and the Board of Directors for PRISM Golden Valley. She is also a St. Paul Area Chamber Ambassador.

TeamWomen is a premier professional women’s organization deeply committed to developing future generations of women in leadership. Membership includes 600 women from the C-suite to young professionals who work in a variety of key industries including business, corporate, sports, and civic organizations. Each year, we inspire women to make meaningful connections and rise together through 40 leadership development events, mentoring, and youth empowerment.

TeamWomen is proud to support women and girls from the classroom to the boardroom.