Authors + Apps | Getting Unstuck: A Guide to Moving Your Career Forward 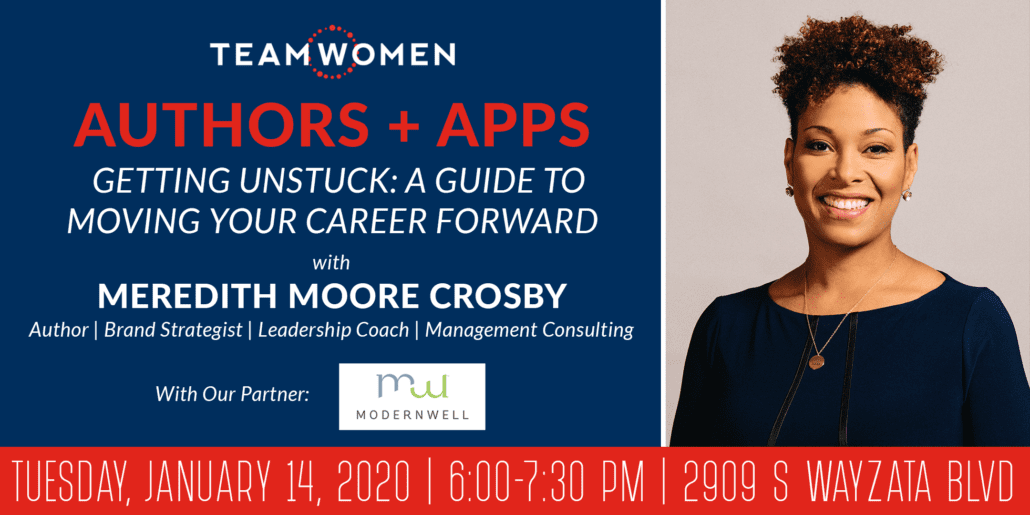 Join TeamWomen for the first meeting of our Authors + Apps series, a book club designed to bring TeamWomen members and friends together over the written word and great discussion!

According to LeanIn and McKinsey’s research, women (especially women of color) are still struggling to advance at work. The study found one in five women feel different or are the only woman at work. That’s especially true in management, where according to Catalyst, despite women receiving up to 60 percent of undergraduate and postgraduate degrees, only represent 26 percent of executives, senior-level officials, and managers. The study finds a common combination of lack of access to mentors, promotions, and feeling isolated as key reasons women fail to make it to the C-suite despite many corporation’s public diversity goals.

Getting Unstuck: A Guide to Moving Your Career Forward shares the unwritten rules that make it possible to see the next step but never reach it. Author and former corporate executive of McDonald’s Corporation, 3M Corporation, and Comcast Cable tells the story and the tools of how one woman found the time and energy to overcome the battle for advancement in corporate America. Meredith Moore Crosby, who supported the historic rise of McDonald’s Corporation’s first African American CEO, shares the story behind her climb to become the youngest director as featured in the bestselling Successful Women Think Differently by Valorie Burton. Getting Unstuck will teach you how to overcome personal challenges to bring your best at work and home.

Visit www.GettingUnstuckGuide.com to order your copy of Getting Unstuck: A Guide to Moving Your Career Forward.

Meredith Moore Crosby loves to tell a good story. Whether she is writing for a c-suite executive or helping a non-profit explain their impact, her award-winning communications give her audiences the courage to do what they want and have an impact inside and outside of corporate America. For more than a decade, she successfully supported senior leaders at McDonald’s, 3M, and Comcast Cable to navigate the uncharted territory of addressing the challenges for women at work.

Early in her career, Meredith was tasked with supporting Mr. Don Thompson during his historic rise to be the first African American CEO of McDonald’s corporation. During her time supporting the c-suite at the largest fast-food restaurant in the world, she launched the company’s philanthropy program and strategic partnerships across the globe. While traveling the world for McDonald’s Global Women’s Initiative, she began to connect her passion for motivating other women to achieve their goals and truly understanding the global trends and frustrations preventing women to advance to management. In 2012, Meredith’s story of becoming the youngest Director in McDonald’s history was featured in the national bestseller Successful Women Think Differently. As her journey in enhancing corporate diversity continued, Meredith began to experience the same challenges she was tasked with solving. Four years later, Meredith earned her executive coaching certification from her mentor Valorie Burton at the CAPP Institute and left corporate America to launch a company focused on advancing women in the workplace.

Today Meredith consults with leaders on how to use communications to attract, retain, and develop high achieving women. As a trained career coach, she promotes education, community engagement, and mentoring; because Meredith knows that the great work of an organization hinges on the individuals working within. Listeners can subscribe to Getting Unstuck with Meredith Moore Crosby for actionable time management and leadership lessons to move forward.

Over the years, Meredith has received many awards, is a sought-after speaker, and appeared in the Chicago Tribune, Ebony Magazine, Savoy, and Rolling Out. She currently resides in St. Paul, MN with her husband, their two boys, and dog. When Meredith is not coaching or writing, she volunteers her time as a member of the national governing board for the Jeremiah Program. She also enjoys spending time with family and is the co-founder of The Network, a community for advancing together.

Thank you to our partner: